Many years ago, when I was in middle school, a good friend confided in me that she was having a tough time living at home. She described how she hated going home to her parents and how she was experiencing abuse and neglect. My house was warm and loving so my heart broke for her. I wasn’t sure how I could help. She thought running away was a good idea and I didn’t talk her out of it. I agreed to keep her secret so no one would find her. In my mind the right 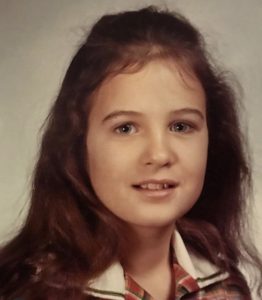 thing to do was to protect my friend from the pain she was feeling at home.

Later that evening when our parents found out she had gone missing, they interrogated me about where she could be. I explained to them that I knew she ran away but I wasn’t going to tell anyone where she was hiding. My parents were furious, how could I disobey them and keep her secret? What if she got herself in trouble or worse hurt? I was confused, I felt in my gut I was doing what was right. I made a promise to my friend and I was keeping it.

To make a long story short, I was the one that ended up in big trouble. Even though I was grounded for an entire month, I was satisfied that I had made the right decision at the time. Now that I’m a mom, I completely understand why my parents were upset. Is the right choice always black and white, or is there a grey area in certain situations? How do we know when to do what’s right if there’s no rules or what’s right isn’t most popular with the majority?  Doing the right thing isn’t easy or clear cut but sticking to what you believe in is.

Having trouble finding what path to take when your faced with a choice that tests your strength and character? Listen and trust your gut. If it feels wrong and icky…DON’T DO IT. Our subconscious does a pretty wonderful job communicating to our body what doesn’t feel right.

What classifies someone as honest? In history there are figures that we have identified as having unwavering integrity in every aspect of their lives and career. No one in history better personifies this than “Honest Abe Lincoln”. As a lawyer and politician, Abraham Lincoln held positions that people consider to be dishonest due to the desire to win over the public. How did he acquire the honest nickname?

As the story goes it began when Lincoln worked as a clerk in a general store. After realizing he shortchanged a customer by a few cents, Lincoln closed down the store to return the few pennies across town. Over the span of his career he consistently chose a firm stance according to his values and morals, even in the face of great opposition. He took a strong position on slavery based on his belief that it was immoral and wrong, even when his views were so unpopular it started a civil war. It takes great courage to stand up for what you feel is right.

“Be sure you put your feet in the right place, then stand firm.”

Honesty with others is important. More importantly, be honest with yourself. Will you recognize when you are about to make a 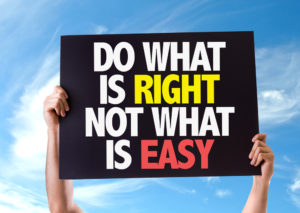 poor decision or lie to others? Possessing integrity means doing the right thing at all times, especially when others aren’t looking. When there isn’t a clear path laid out for you, do you have enough self-awareness to make the right choice? All relationships are built on a foundation of trust. Being honest with yourself and transparent with others is the foundation for a healthy relationship in your personal and professional life.

Would you describe yourself as someone who does the right thing… sometimes, most of the time or all the time no matter the cost?

“It often requires more courage to dare to do right than to fear to do wrong.”

I was curious if you ever thought of changing the structure of your website? Its very well written; I love what youve got to say. But maybe you could a little more in the way of content so people could connect with it better. Youve got an awful lot of text for only having one or 2 images. Maybe you could space it out better?